This Whole30 slow cooker pineapple pork only uses a few simple ingredients paired with a pork loin, and a crock pot to create an easy family-friendly weeknight meal or a quick meal prep recipe. It’s so full of flavor, while also being Paleo, gluten-free and dairy-free. This healthy recipe in the slow cooker really couldn’t be easier!

The basis of this recipe is really only two ingredients- the pineapple and the pork, of course. For the pineapple, it’s best to used canned chucked pineapple. Just make sure that there are no additives and that the pineapple chunks are packed in 100% pineapple juice and not syrup. This is typically pretty easy to find in the canned fruit section at major grocery retailers.

You’ll also need your boneless pork loin, which will need to have any visible fat trimmed off if it’s not already. Next, you’ll need coconut aminos, minced garlic, and some spices which will season the pork and create the sauce, and then arrowroot flour for thickening. Coconut aminos and arrowroot flour are also widely available at stores, Amazon, or Thrive Market online for a discount. 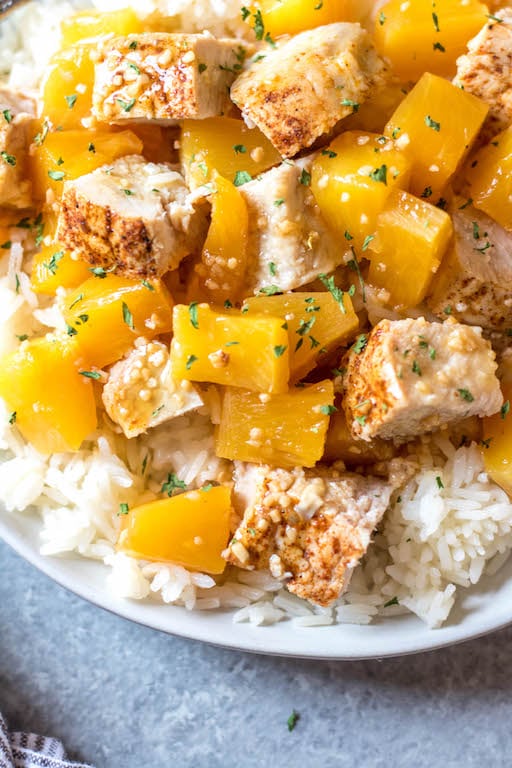 How to Make this Pineapple Pork in the Slow Cooker

The first step is to prep the pork loin by searing all sides of it before putting into the crockpot. You’ll season the pork loin, and then heat up a few tablespoons of olive oil or avocado oil in a large skillet over medium-high heat. Then, sear each side for about 2 minutes each.

There’s two ways to finish the Whole30 pork loin. The first is to cook it for 4-6 and then slice it into chunks or slices once it’s done, or you can cook it for a bit longer, 8-9 hours or until it’s tender and falling apart, and shred it and serve it that way. Both are great, it just depends on what you want the texture at the end to be!

To finish the pineapple pork, at the very end once you remove the pork loin, you’ll add the arrowroot into the slow cooker with the pineapple and remaining liquid to make a thicker sauce that will be poured over the pork. Just keep stirring until the sauce has thickened. If you want it to be even thicker, add an additional tablespoon of arrowroot. If you ever accidentally get anything too thick you’re thickening, you can simply add a bit of water to the sauce to thin it back out!

What to Serve With

You’ll see it pictured here with rice, but to make it Whole30, simply use cauliflower rice instead. Other great ways to use this Whole30 pineapple pork recipe is to throw it into tacos, wraps, over fajita peppers, over coleslaw, or crispy roasted potatoes. 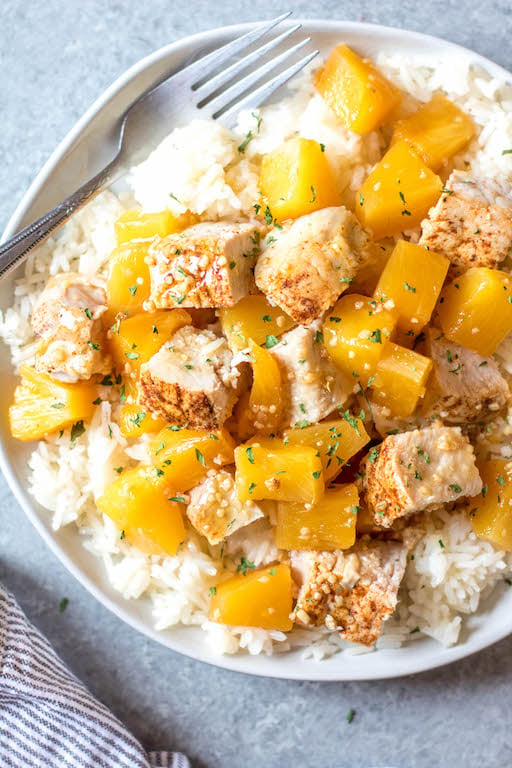 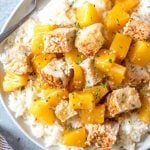 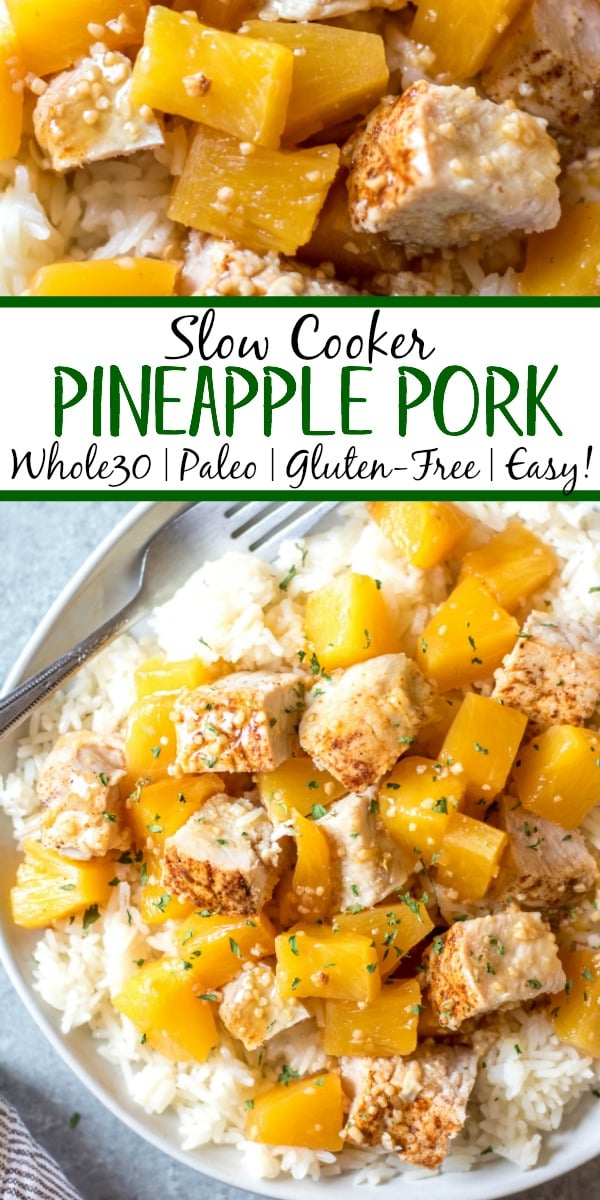 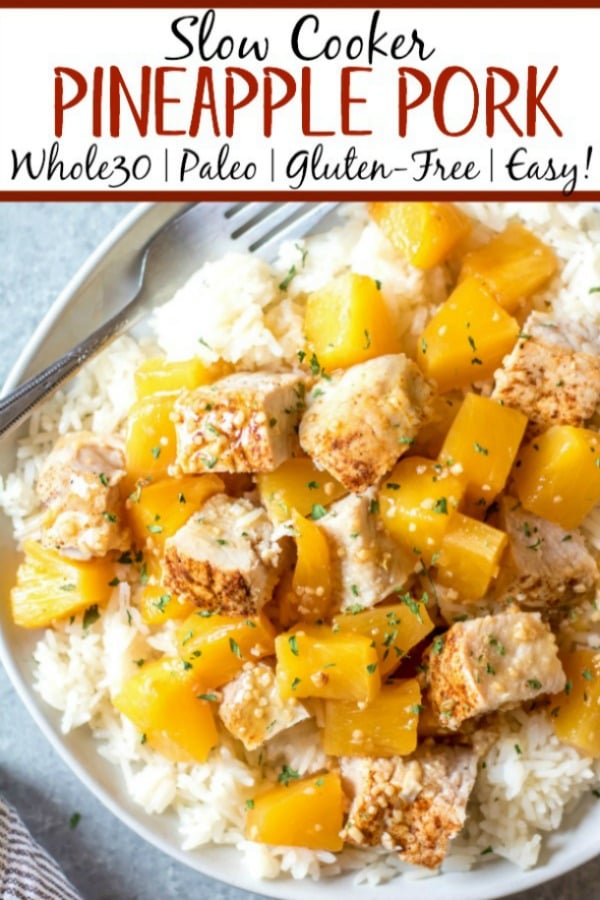 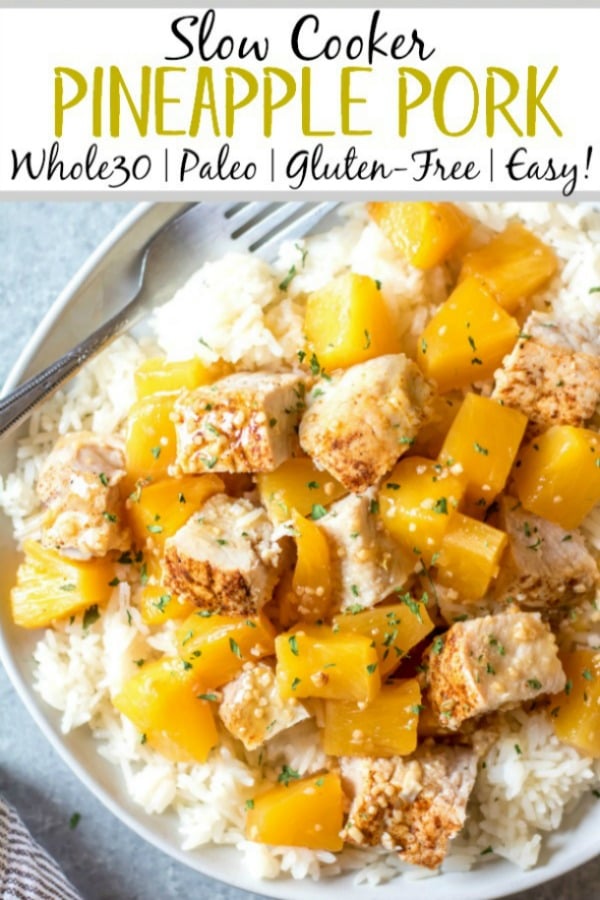 This Whole30 slow cooker pineapple pork post may contain some links that are affiliate links, though products are ones I use personally and recommend. When you purchase anything using my links, it costs you absolutely nothing extra, but it does give wholekitchensink.com a little financial support which helps to keep this blog running. Thank you for your continued support, both with your dollars and your interest.