This Whole30 coconut lime chicken skillet is a gluten free, dairy free, and paleo chicken recipe that is made all in one pan! The creamy coconut sauce and chicken breasts are perfectly seasoned with lime, onion, cilantro and garlic. It all comes together in about 30 minutes, and is great for an easy Whole30 dinner that’s family friendly, or a healthy meal prep recipe for lunches during the week.

This easy gluten free chicken skillet recipe only has a few simple ingredients that you need fresh, and a few simple ones that are pantry items. For the fresh ingredients, you’ll need 2 large chicken breasts, which will be sliced lengthwise into 4 flatter cutlets. You can do this by laying the chicken breast flat and placing your palm over the top. Use a sharp knife to slice through the middle of the breast and resulting in two fillets. 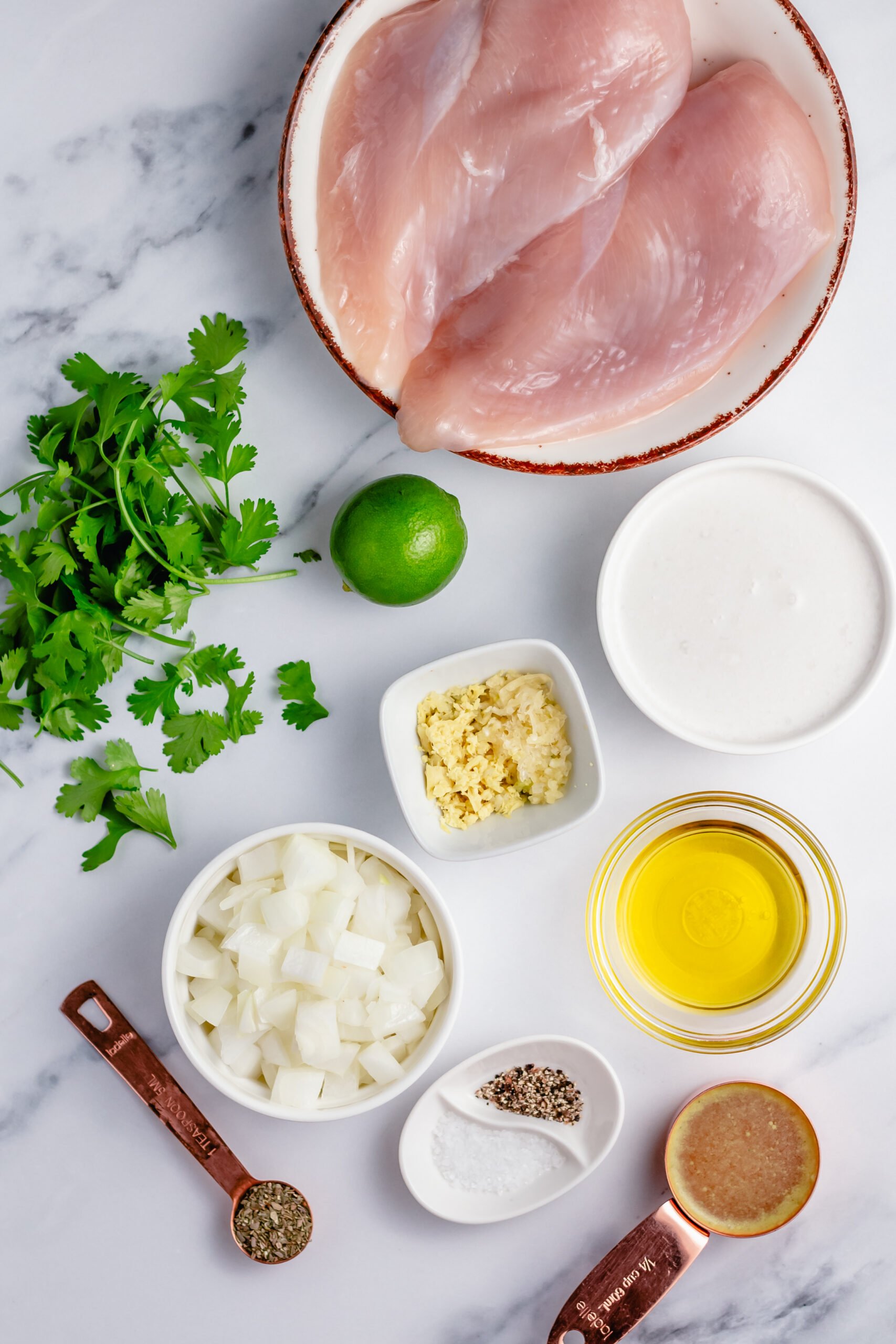 The remaining shelf stable or pantry ingredients you’ll need include olive oil, minced garlic, minced ginger, dried basil and coriander. Chicken broth, canned full fat coconut cream and salt and pepper round out the list of items you’ll have gathered to cook this recipe. All of these are widely available at grocery stores, and the pantry items online at places like Amazon or at a discount from Thrive Market. 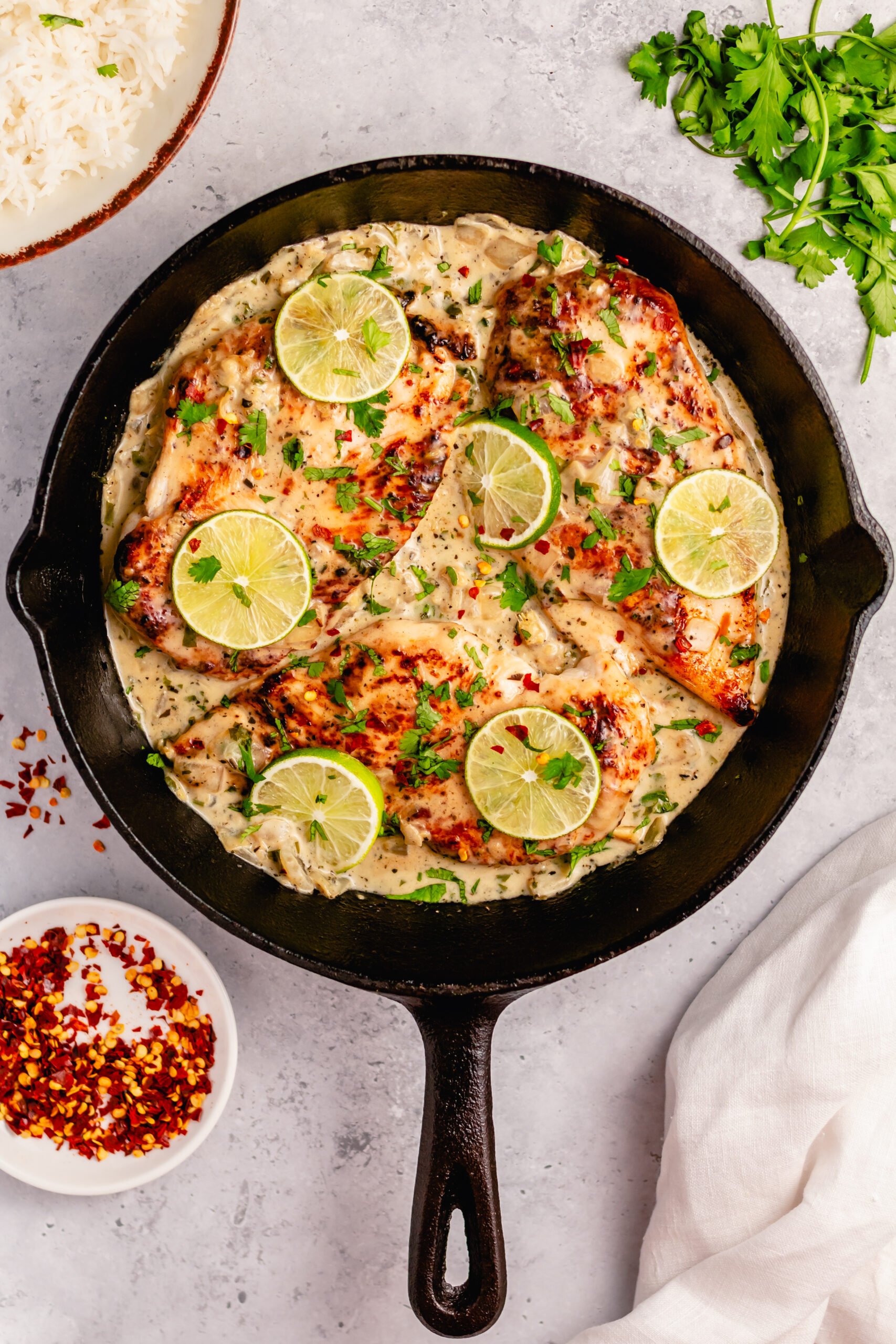 How to Make This Gluten Free Chicken Skillet

Once the ingredients are prepped and the chicken has been sliced into cutlets, you’ll heat a large cast iron over medium-high heat. Add the olive oil to your skillet and give it 4 to 5 minutes to fully heat up. When cooking with cast iron, it’s important to wait until the skillet is hot before cooking. This insures that the cast iron is nonstick.

Season your chicken with salt and pepper on both sides while the skillet is heating. Add the chicken cutlets into the skillet and let them cook for about 4 minutes, undisturbed. Once a crust has formed, flip the chicken fillets over and cook them for another 4 minutes. The chicken will be mostly cooked through, but it doesn’t need to be completely cooked. 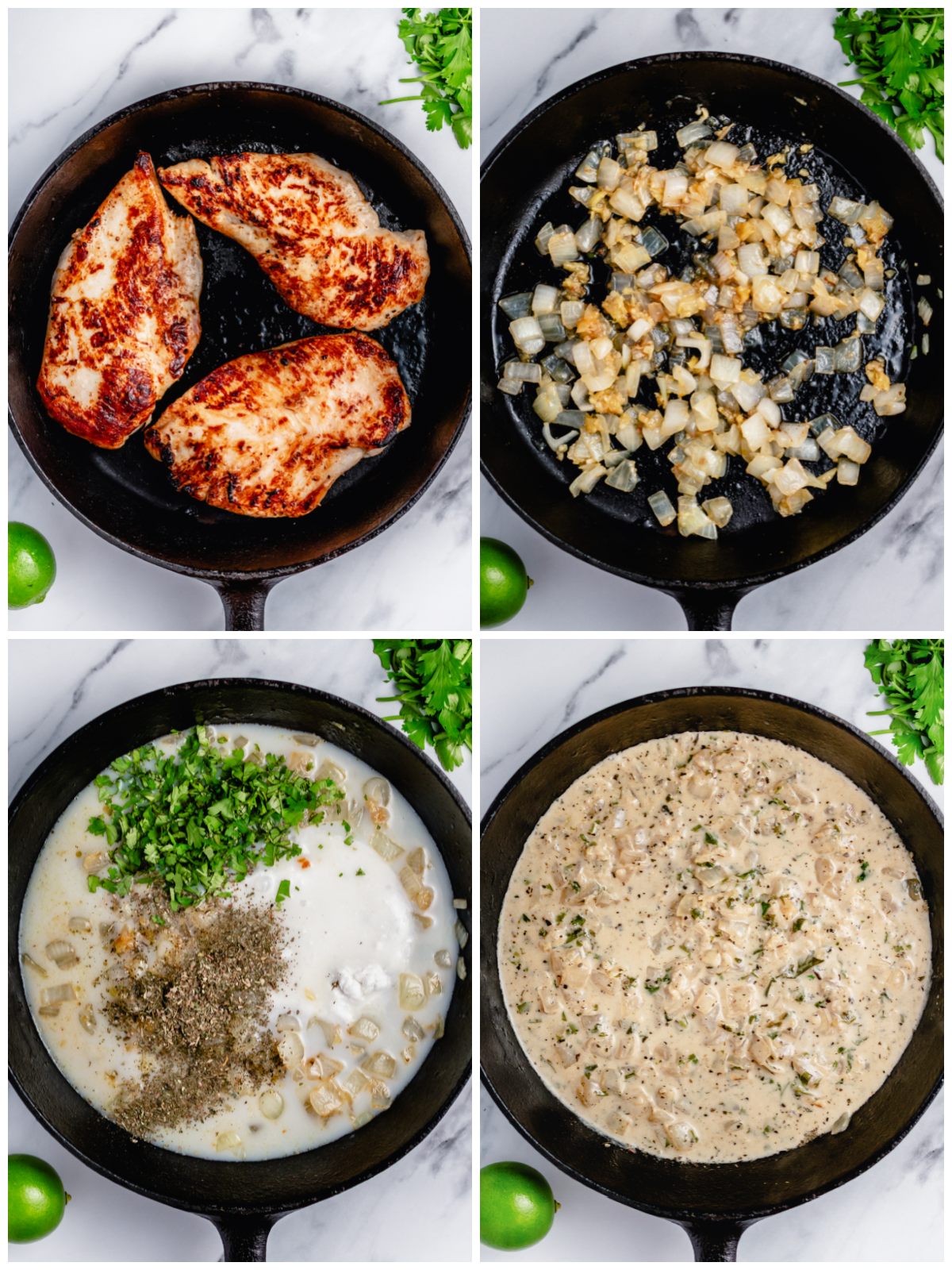 Transfer the chicken out of the skillet and onto a plate. Now you’ll add in your diced onion, along with the garlic and ginger. If a bit more oil is needed, add another tablespoon. You’ll sauté the onion, garlic and ginger for about 10 minutes until they’re browned.

At this point, pour the broth into the skillet and scrape up all of the browned bits from the bottom of the cast iron. Then add in the coconut cream, basil, coriander and lime juice. Stir to combine everything while continuing to scrape up any browned bits on the bottom while stirring. 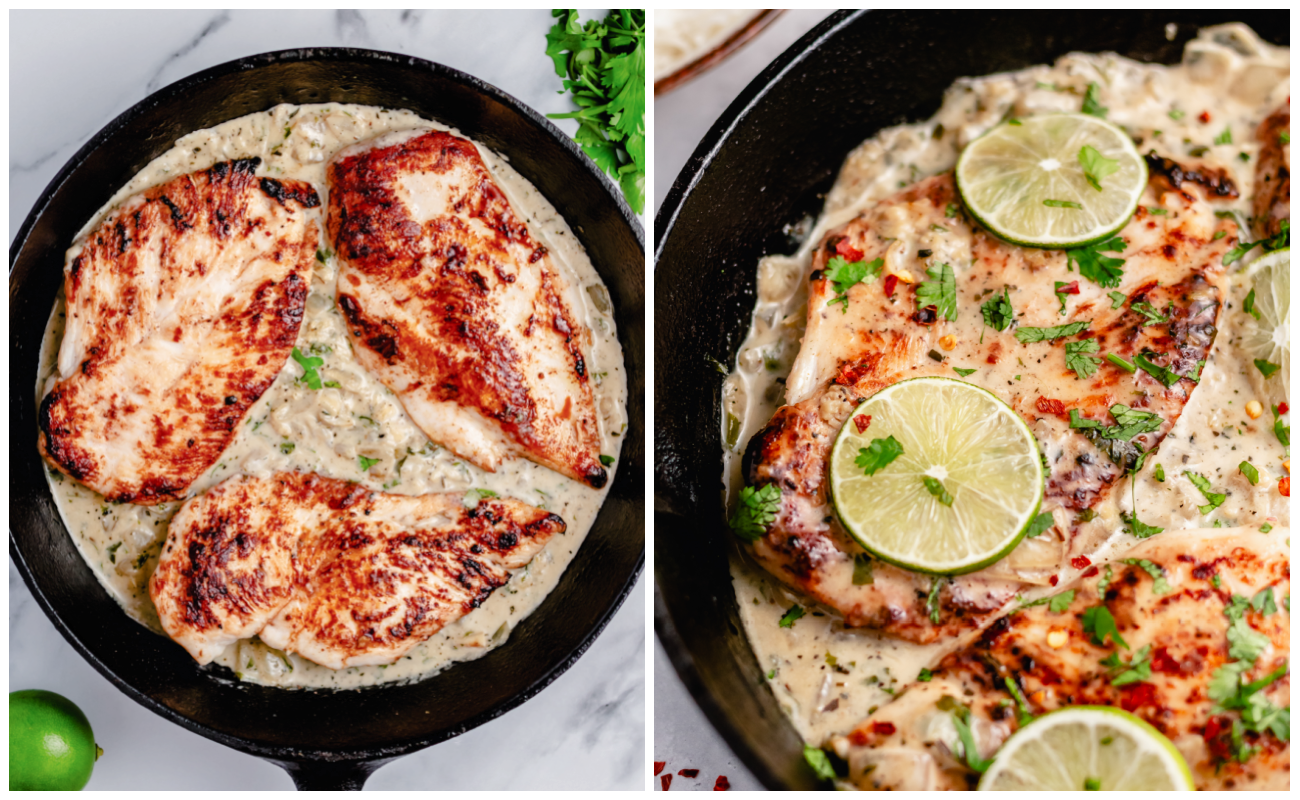 Bring the skillet to a simmer, reduce the heat to medium. Let this simmer for about 10 minutes to let the sauce reduce down and thicken. After those 10 minutes, stir in the chopped cilantro and red pepper chili flakes if you’re using them. Transfer the chicken back into the skillet, nestling them back into the sauce.

Then you’ll cover the skillet and let it simmer about 5 more minutes, or until the chicken is cooked through. Taste your sauce and add any additional salt and pepper as desired, and then spoon the sauce over the chicken breast fillets. 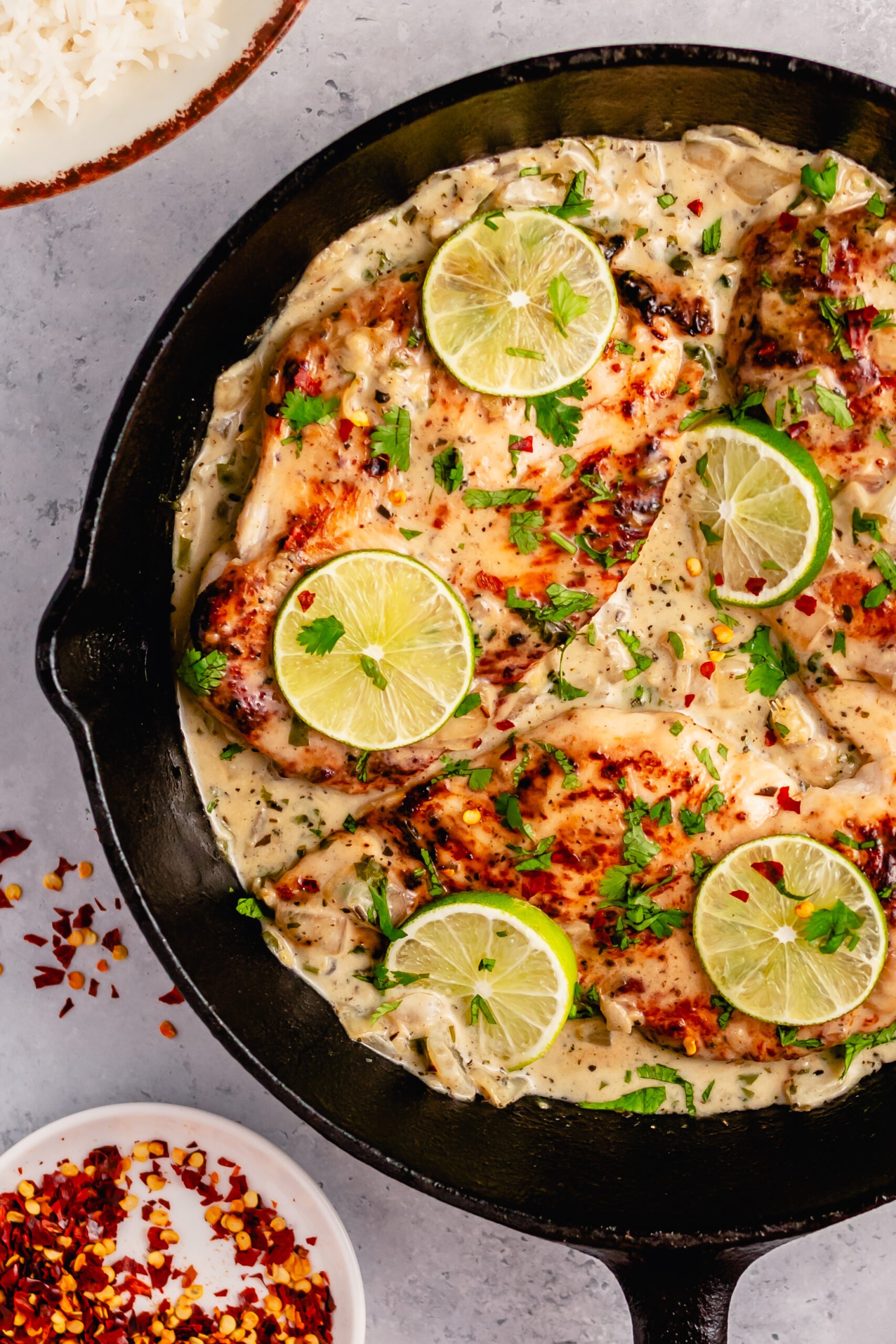 What to Serve Coconut Lime Chicken With

Once you remove the skillet from the heat, there are many ways serve it. You can have this Whole30 chicken over cauliflower rice, shredded cabbage, or with roasted vegetables like broccoli, green beans, kale, or sweet potatoes. If you’re not keeping this Whole30, it’s great with basmati or brown rice!

This recipe also makes great leftovers that can be tossed over salads, too. Garnishes include, but of course aren’t limited to, more chopped cilantro, green onion, red pepper flakes or lime wedges. 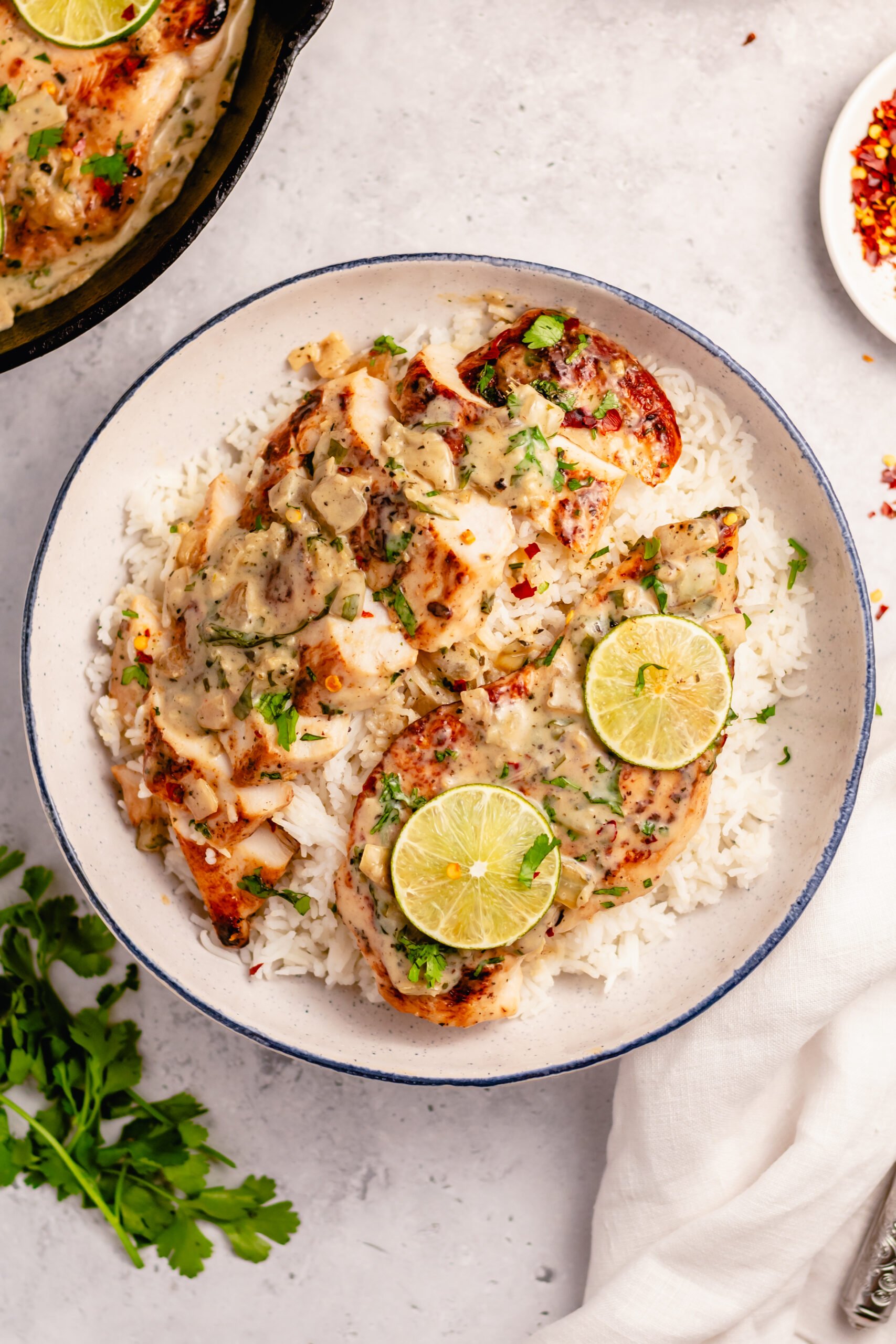 To store your coconut lime chicken, you want to first let it cool completely. Then you can store it in an air tight container, or portion it out into individual containers for easy reheating or meal prep. When storing individually, put the chicken breast in and then spoon the sauce from the pan over the top of each chicken breast evenly so that each cutlet gets some of the leftover sauce.

This chicken is good in the fridge for up to 4 days. I do not recommend freezing it as the coconut cream separates when frozen. 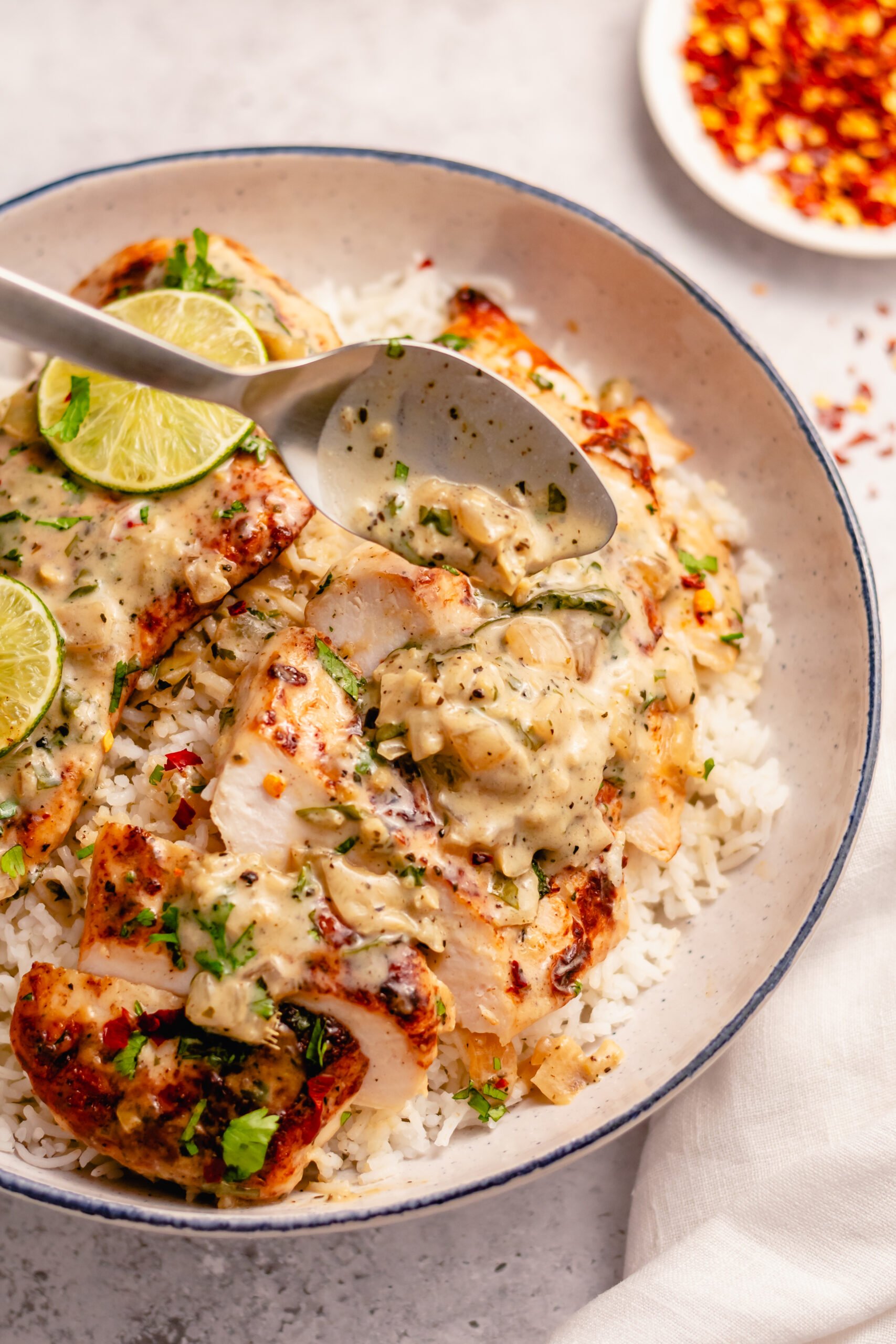 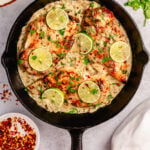 This Whole30 coconut lime chicken skillet post may contain some links that are affiliate links, though products are ones I use personally and recommend. When you purchase anything using my links, it costs you absolutely nothing extra, but it does give wholekitchensink.com a little financial support which helps to keep this blog running. Thank you for your continued support, both with your dollars and your interest.