This paleo and Whole30 slow cooker chicken tikka masala recipe is every bit as easy as it is delicious. It’s a truly set it and forget it recipe that only requires a few simple ingredients, chicken and a crock pot. The end result is a tasty, healthy and family friendly weeknight dinner or meal for meal prep for the week! It’s gluten-free, dairy-free and keto, so it’s great for any type of eater in your family! We love this recipe just as much as our local Indian restaurant’s menu option!

Making this Whole30 tikka masala is incredibly easy. The majority of the flavor comes from the spices you’ll need to use. While this cannot be a truly authentic tikka masala because we’re using coconut milk for the creamy consistency, the spices are the typical Indian spices. These include garam masala, turmeric, cinnamon, coriander, and a few other more common ones.

All of the spices needed are available at all major grocery stores, on Amazon, or at a discount from Thrive Market, which is where I usually buy the bulk bags, and most are under $3. I also get a lot of my canned goods there too, including the coconut milk, ghee and tomato paste needed in this recipe. The other ingredients include boneless, skinless chicken. Breasts or thighs work for this chicken tikka masala recipe. Thighs tend to have an end result that’s a bit more juicy and full of flavor while diced chicken breast tends to hold up better in the bite size pieces. You’ll also need a fresh lemon for the lemon juice, ghee and then arrowroot flour to thicken if you want a thicker sauce and then cilantro to garnish and add a pop of flavor. 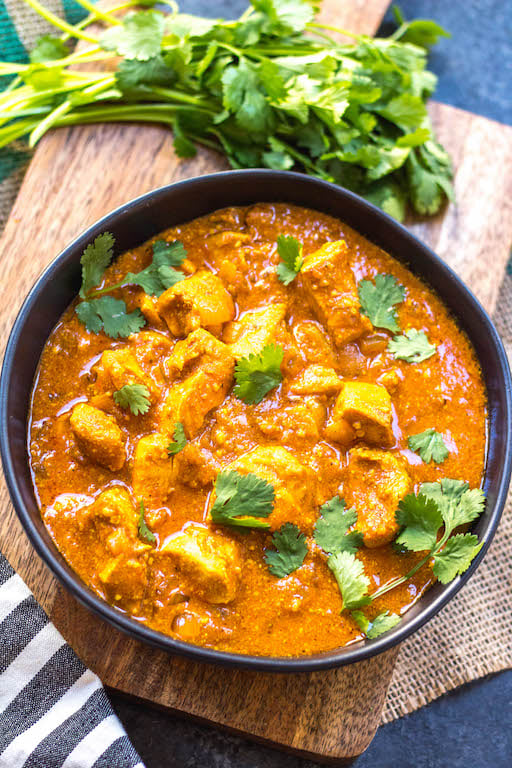 There’s only a few simple steps to prepare this recipe and get it going in the slow cooker. First you’ll dice up the chicken and onion and add them both into the slow cooker. From there, you’ll add in all of the spices, the lemon juice, garlic, ginger, ghee, broth and tomato paste. Quickly give it a good stir to combine the spices with the liquid and to coat the chicken.

Cover and cook the Whole30 chicken tikka masala on low for 6-8 hours or on high for 3-4. Once the chicken is cooked, go ahead and add in the canned coconut milk. This is also when you’ll add in the arrowroot if you’re wanting the sauce to be thicker. Stir it all to combine and place the cover on again. Turn it down to low if it isn’t already, and let it sit for 10-15 minutes to let the coconut milk heat up and incorporate into the sauce. 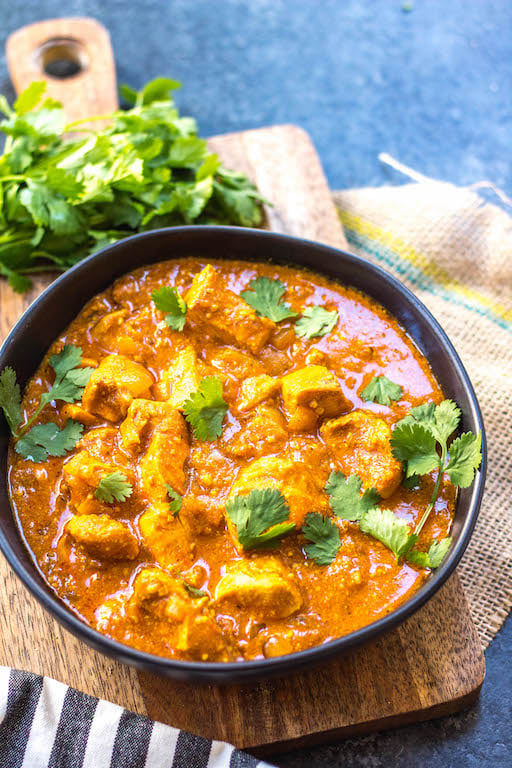 Serve this tikka masala over cauliflower rice (or basmati rice if you eat it!), garnish with cilantro and enjoy! This recipe does freeze well, but when heating up after it’s been frozen the sauce will need to be stirred well to incorporate the coconut milk again, which separates when frozen. 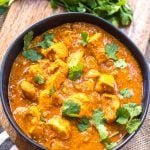 This Whole30 Slow Cooker Chicken Tikka Masala post may contain some links that are affiliate links, though products are ones I use personally and recommend. When you purchase anything using my links, it costs you absolutely nothing extra, but it does give wholekitchensink.com a little financial support which helps to keep this blog running. Thank you for your continued support, both with your dollars and your interest.